Challenges that Children in Uganda face

THE CHALLENGE FOR UGANDA’S CHILDREN
49 out of 1000 children die before their 5th birthday.
23% of school-age children are out of school.
29% of children suffer from stunting due to malnutrition.
16% of children are engaged in child labor.
21% of people live in poverty.
The south is relatively prosperous and most children go to primary school. But the north suffered a series of internal armed conflicts from the late 1970s, and more recently has seen a huge influx of refugees (almost 200,000) fleeing war and food shortages in neighbouring South Sudan.
We work with local partners to protect and counsel vulnerable children in Uganda. 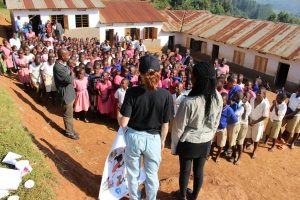 1.5m children are in need of humanitarian assistance
58% of the refugee population are children
Realizing Children’s Rights in Uganda
War, famine, AIDS… In Uganda, there has been no end to these and other crises that have proven disastrous for children. Children’s rights thus remain the object of an unrelenting assault; the conditions of their existence and survival precarious at best.
Realization of Children’s Rights Index: 6.06/ 10
Red level: Difficult situation
Pop. Ages 0-14: 50 %
Life expectancy: 58.7 years
Under-5 mortality rate: 69%
The current population of Uganda is 44,848,615 as of Sunday, November 24, 2019, based on Worldometers elaboration of the latest United Nations data.
Uganda 2019 population is estimated at 44,269,594 people at midyear according to UN data.
Uganda population is equivalent to 0.57% of the total world population.
Uganda ranks number 32 in the list of countries (and dependencies) by population.
The population density in Uganda is 222 per Km2 (574 people per mi2).
The total land area is 199,810 Km2 (77,147 sq. miles)
25.2 % of the population is urban (11,135,655 people in 2019)
The median age in Uganda is 16.1 years.

MAIN PROBLEMS FACED BY CHILDREN IN UGANDA:
Poverty
In Uganda, more than a third of all inhabitants live below the poverty line. Children are the primary victims of this deplorable economic situation. Their families cannot ensure their health or their well-being, particularly in remote regions of the country.
Some children are sent to live in towns and cities as it is thought that they will be better off living in urban areas. Instead, they often end up living on the streets.
Other rights are neglected as a result account of poverty. Access to education, for example, is a privilege from which only the most fortunate children benefit. 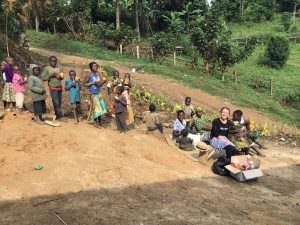 Right to Health
In Uganda, the mortality rate of children under the age of five is gravely high, and life-expectancy at birth particularly low.
Poverty, lack of infrastructure and ill-suited personnel are barriers to the health of children. Viral maladies are very virulent and are rapidly transmitted on account of lack of hygiene and unhealthy living conditions. Cholera, for example, is one of the problems that gravely affect the health of Ugandan youths. The use of dirty water in many households leads to many children becoming infected by this particular disease which can turn out to be fatal.
AIDS is equally prevalent throughout the country. In recent years, significant progress has been made regarding AIDS-prevention. Still, the virulence of this virus remains disconcerting. Too many children still become orphans as a result of AIDS, and their future remains very dark.
Right to food
Many Ugandan children suffer from malnutrition. The country’s northeastern region is very arid and the most affected. There, the land is too dry to produce an adequate amount of food; consequently, food shortages are a regular problem. In 2010, around 40% of children under the age of 5 suffered from dietary shortcomings.
Malnutrition among children has a serious impact on their health. Some die from it, while others exhibit deficiencies that can lead to any number of diseases. Lack of nourishment can have harmful effects that are sometimes felt for the entire duration of one’s life. 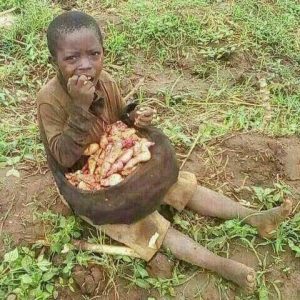 Child Marriage
The practice child marriage is widespread in Uganda. One estimates that the number of young girls who marry before the age of 18 exceeds 46%. The consequences are grave, especially for very young girls (12-13 years of age is the average in certain villages).
Right to Education
Nearly one out of every five children in Uganda is uneducated. The problem is particularly serious among young girls living in rural areas.
Many school children cannot finish their schooling as they must abandon this in order to help pay family expenses. While supplementary school costs dissuade many parents from sending their children to school to begin with.
Child Soldiers
Children have played a major role in the conflicts that regularly erupt in Uganda. They were, in effect, recruited by armed groups who kidnapped them at an early age; and they lived under the most atrocious conditions.
Young girls were raped and then kidnapped from their homes. Having fallen into the hands of these armed factions, they were forced to prostitute themselves and were constantly mistreated by their captors.
Numerous young boys became active members of armed groups. On orders from their commanders, they murdered and massacred entire families. The violent acts that they have witnessed, committed and been subjected to during childhood, will have a long-term effect on both their physical and mental health. The image of those acts will remain with them for the rest of their lives and their personalities will be changed forever.
Reintegrating such children into civil society is complicated. They have known only violence and cruelty over many years and find it difficult to return to a normal life. Certain centers have been established to aid them, but it is still hard to bring them back into the fold.
Street Children
Many young Ugandan children are forced to live on the streets. The find themselves forced to migrate either because their parents have died, or owing to the drought and misery of the region in which they live. At least 10,000 children live on the streets in Uganda, particularly in the capital of Kampala. The conditions they face are very bleak and they must constantly fight to survive.
Survival is very difficult. Begging is often their only option, even if this practice is very dangerous and frequently leads to their being violently beaten when they ask passersby for money.
Children who live on the streets are equally at the mercy of slave traffickers who, despite promising them a better life, quickly take advantage of them. Such children rapidly become the victims of many vile practices and despicable acts.
Child abuse
In Uganda, violence committed against women and children is very prevalent. It frequently occurs within the heart of the family. Those who commit such violence are very rarely brought to justice. Numerous pieces of legislation have been proposed for the purpose of eradicating child abuse, but the situation remains far from satisfying. The protection of children must be incontestably reinforced because the physical and psychological consequences of child abuse are both serious and long-lasting.
Child Labour
In Uganda, work is an everyday reality for about 36% of children between the ages of 5 and 14. They are compelled to find an activity that will improve their families’ financial resources, or, if they are orphans, that will enable them to survive.
Certain children leave the land of their birth and become servants or work in agricultural sectors in neighboring countries. Child-trafficking is equally prevalent throughout the territory. Children are exploited in a variety of ways; some become the pawns of sex-merchants, while others end up in the drug-trade. Uganda is unfortunately one of the principal sources and destinations of child-trafficking.
Homeless street children who avoid falling into the clutches of traffickers have no choice but to beg. And the conditions of their existence are absolutely deplorable.
Right to an Identity
The situation is alarming in Uganda since only 1 birth in 5 is officially reported to the public authorities. This disconcertingly low percentage is primarily the result of the inaccessibility of
registry services. Cost is also a factor, since the fees required for such a formality remain in practice quite high, despite Uganda’s efforts to improve the situation.
Many children possess neither an official identity nor a nationality. This in turn leads to greater difficulties for the individual in question: since they do not technically exist in the eyes of the law, they will not be able to enjoy their rights. 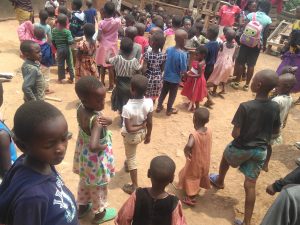 Freedom of Expression and Opinion
In Uganda, speech can sometimes prove costly. Different opinions are not always welcome, and it can be risky to voice them too strongly.
The use of force is common; in general, demonstrations are violently suppressed. As a result, the personal security of individuals is considerably limited. Often, it is the nonpartisan individual who finds him- or herself in wrong place at the wrong time, and ends up paying the price. A certain number of children, for example, are routinely wounded or even killed during these demonstrations.
The situation for homosexuals, bisexuals and transsexuals is equally deplorable. They are violently persecuted and their freedom of expression totally violated. Homosexuality is considered a crime and can be punished with extremely heavy prison sentences. The rights of adolescent children are totally obsolete and they have no means of making themselves heard and respected.
Almost two-thirds of the Sudanese refugees and asylum seekers in Uganda are under the age of 18.
The brutal conflict in South Sudan has heavily affected the mental health and wellbeing of children living in the refugee settlements.
Apathy and despondency are commonly detected symptoms, especially among children that have suffered traumatic events.
Thanks for extending your helping hand to secure the lives of these children.
TAREMWA ALBERT
EXECUTIVE DIRECTOR
LOSCO